What if I meet a bear on the trail at Tahoe? Does Bear Mace Work? Information About Pepper Sprays

Pepper spray, also known as OC spray (from "Oleoresin Capsicum"), OC gas, and capsicum spray, is a chemical compound that irritates the eyes to cause tears, pain, and even temporary blindness. This is why pepper spray is useful for personal self-defense, including defense against dogs and bears as well as human attackers.

Pepper spray is considered a less lethal agent, and therefore it is the choice of many customers who are not candidates for using a gun or other weapon to defend themselves.

The active ingredient in pepper spray is capsaicin, which is a chemical derived from the fruit of plants in the Capsicum genus, including chilis. Getting oleoresin capsicum from peppers involves finely ground capsicum, from which capsaicin is extracted in an organic solvent such as ethanol. The solvent is then evaporated, and the remaining waxlike resin is the oleoresin capsicum. An emulsifier such as propylene glycol is used to suspend the OC in water, and pressurized to make it aerosol in pepper spray. 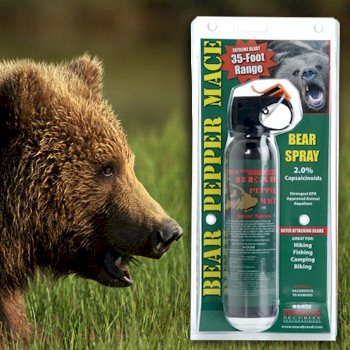 How can you tell how powerful a pepper spray you are buying?

What happens to an attacker?

Pepper spray is an inflammatory. It causes immediate closing of the eyes, difficulty breathing, runny nose, and coughing. The duration of its effects depend on the strength of the spray but the average full effect lasts around thirty to forty-five minutes, with diminished effects lasting for hours, thus giving you a chance to escape.

We stock only new pepper sprays by the leading manufacturers. You can choose from...

Q. Will cans of Muzzle have shortened use life (the propellant effectiveness) if they are shaken on a daily basis? I ask because I carry mine in a front pants pocket and, since I walk fast, it gets shaken up a lot....four or more miles per walk. Thank you."

A. Don't worry. The shaking from walking or running won't affect the effectiveness at all. You can jiggle it all you want, and it won't decrease the propellant effectiveness. Here is some more advice from police who carry pepper spray all the time...

"As molecules of propellant tend to leak past the seals over time, it is recommended that you test spray your pepper spray a couple of times a year to make sure its operating properly and has not lost pressure. All pepper spray products use a nitrogen,CO2 or Freon propellant which is nonflammable and provides a consistent and reliable spray pattern for years and in a wide range of temperatures. These products have a shelf life of around 4 to 5 years (may be less for 1/2 oz. units due to its small size and small amount of propellant). The OC spray does not deteriorate like tear gas. It is only the pressurization of the propellant which declines over time."

Also, please note that Muzzle works on dogs with muzzles and not pug face dogs because their tear ducts are not the same. A regular pepper spray will actually be more potent and will work on dogs with muzzles, so you can carry any pepper spray and it will work on dogs. The SPCA and animal lovers like muzzle the best because it is kinder to dogs, but a lot of folks decide to carry regular pepper spray for possible dog attacks or whatever attacker may come. It is a personal choice.

An Associated Press article of April 21, 2008 reports - ANCHORAGE, Alaska - A study concludes that bear spray works 98 percent of the time in warding off bear attacks, and that in the few cases it did not work, the problem was in aiming the spray - not the spray's effectiveness.

Biologist Tom Smith and others have published a paper of their research in The Journal of Wildlife Management. The study says bear spray is effective 98 percent of the time.

The researchers looked at 83 cases where bear spray was used and found that none of the incidents involved any serious injuries. The red-pepper spray causes painfully swollen eyes and nasal passages on its targets.

Smith spent years working in Alaska as a bear biologist for the U.S. Geological Survey. He now is a professor of wildlife science at Brigham Young University.

In the report, Smith noted the risk for injury is greater with firearms, the other main means of self-protection. Wounded bears sometimes turn on people, he said. For example, Johnny McCoy, a Baptist minister and former North Pole mayor, was hurt in 2001 by a grizzly bear that attacked moose-hunting partner Gary Corle. Corle shot at the bear with his rifle, but missed. The bear then turned on McCoy, who needed surgery to reattach his ear and close large gashes in his forehead, arms and hands.

Bear spray has been used in Alaska for more than two decades. No similar attacks against those using spray in self-defense have been reported.

"Bear spray represents an effective alternative to lethal force," the researchers wrote. But bear spray also has its limits. Smith notes there have been problems with the spray in the wind, although its biggest drawback may be the one-shot limit.

Smith reported that in "7 percent of bear spray incidents, wind was reported to have interfered with spray accuracy, although it reached bears in every case."