Much of the area surrounding North Lake Tahoe is devoted to tourism. As you drive along the lakeshore at the North end of Lake Tahoe, you pass through the Lake's most diverse variety of restaurants, ski slopes, casinos, shops and housing. North Lake Tahoe caters to a wide variety of visitor tastes and pocketbooks from the most upscale and expensive to the most economical

The wide variety of choices along the North Shore of Lake Tahoe is the reason why tousands of people from all over Nevada and California, including Las Vegas, Los Angeles San Diego and San Francisco, flock to this area of Lake Tahoe.

... is all about tourism, and that means fun. The surrounding Sierra Nevada mountains provide excellent skiing in the winter and the lake itself is a draw for tourism in the summer. Additionally, real estate, recreation, retail, government, service-industry, restaurants and construction provide a good number of jobs for local residents.

Can you guess where you would be standing on Lake Tahoe, if you were actually viewing the Lake bottom as shown in the image below? Hint: South Lake Tahoe is on the distant shore. Click on the image find out on the USGS Lake Tahoe Data Clearinghouse; then, start your discovery by searching for Lake Tahoe seafloor maps... 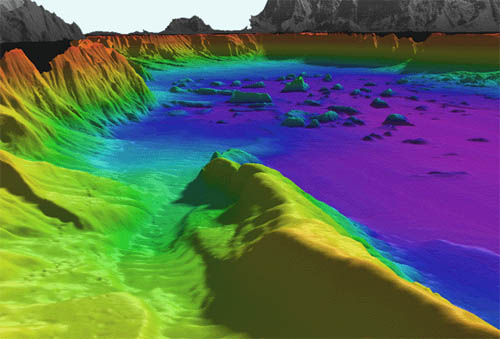 The folks at Wikipedia, the free encyclopedia, have compiled more statistics about Sunnyside-Tahoe City.

There were 789 households out of which 20.8% had children under the age of 18 living with them, 37.9% were married couples living together, 4.6% had a female householder with no husband present, and 54.1% were non-families. 30.0% of all households were made up of individuals and 3.7% had someone living alone who was 65 years of age or older. The average household size was 2.23 and the average family size was 2.75.

We found this fun Lake Tahoe tote bag on Amazon