Birds of the Lake Tahoe Basin

There are many bird species in the Lake Tahoe Basin. Here is an introduction to the birds most often seen at Lake Tahoe. (Reprinted with permission of our friends at US Dept. of Agriculture.)

The male Western Tanager is one of the most colorful birds in the Lake Tahoe Basin. His red head, bright yellow body with black on the back, wings, and tail, makes him a very eye-catching bird. 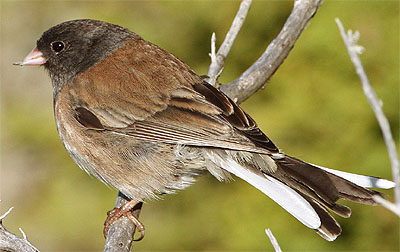 One of the four forms of Dark-Eyed Junco, the Oregon Junco is one of the most abundant and easily recognized birds in the Sierra forest. These small birds have solid black heads and white stripes on either side of their tails and are often seen eating seeds on the forest floor. 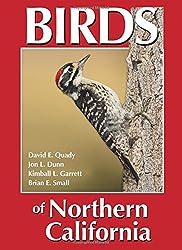 This 5-star winning birding guide is indispensible for your birding! More than 500 photographs illustrate species, often in different plumages.

Birds of Northern California includes A Quick Guide to Local Birds at the front of the book, for easy reference and getting started. Find out more about the sixteen unique geographic regions that support the bird diversity of northern California and highlight the importance of habitat conservation.

This bird is often found in cattail and tule marshes. No other Lake Tahoe Basin bird has such a distinctive yellow head and black body. It is generally spotted in the Pope Marsh area during early spring.

This type of duck is considered a "puddle duck" because it typically prefers shallow water such as creeks, ponds, and marshes. The male Mallard is easy to spot because of his glossy green head and narrow white collar. Usually you can see the ducks flying south in formation for the winter.

This is the most common goose in North America. It has a black head and neck with a distinctive white "chinstrap" stretching from ear to ear. Elevated nesting platforms installed in the Pope Marsh area in 1976 have greatly improved nesting success. These long-necked, noisy birds are very abundant during the summer and are readily viewed by visitors. 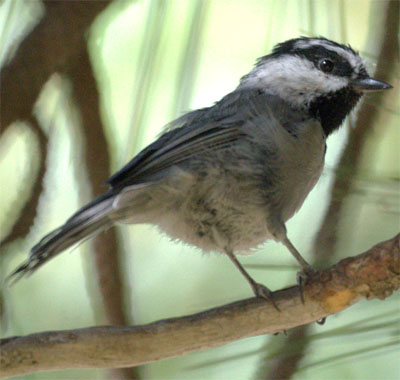 The most common bird in the Tahoe Basin is the Mountain Chickadee. These small plump birds have a black cap, black bib under their chin and a white line over each eye. Chickadees are very acrobatic, swinging from the tips and undersides of branches as they hunt for insects and seeds. They sing a very distinctive three note whistle song. And, it's loud! Most birders are surprised at first that such a tiny bird is the source of such a voluminous song. The chickadee sings a high note followed by two lower. What is the Mountain Chickadee saying? Some birders say they hear "Hey Ba-by!" or even "Ham-bur-ger!" What do you think are the lyrics to the Mountain Chickadee song, when you hear it? 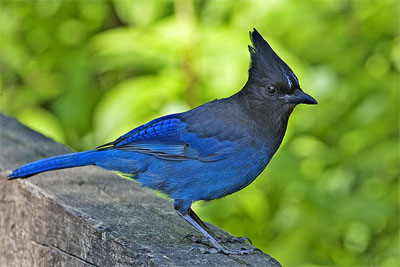 Almost anyone who spends time in the forest will meet the noisy Steller's Jay. This pigeon-sized bird with deep blue wings, tail, and breast, is hard to miss. Often this jay becomes quite bold, sometimes stealing bread crusts from tables where people are picnicking. 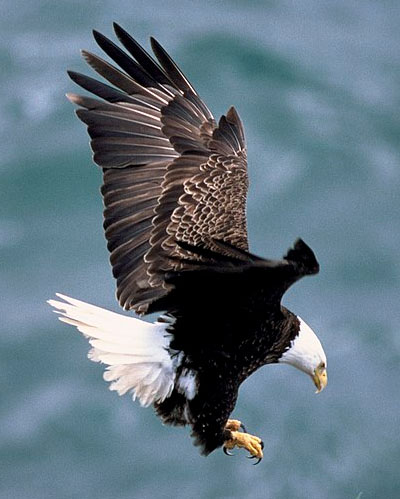 This eagle can occasionally be seen during the winter months at Lake Tahoe. The majestic adult Bald Eagle, with a wing span reaching seven feet, can easily be identified because of its white head and tail. Often mistaken for an eagle, the Osprey is a summer resident of the Basin. It is sometimes referred to as a Fish Hawk because it feeds only on fish. 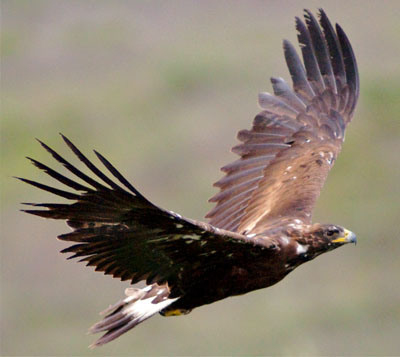 Adults are brown with tawny on the back of the head and neck; tail faintly banded. Juveniles have white patches at base of primaries, white tail with a distinct dark terminal band. It takes four years to acquire adult plumage. The golden eagle is a solitary bird, which can be found in remote areas. They do not congregate in large numbers during the winter. Being a great hunter, the golden eagle seldom eats carrion. Its hunting territory extends up to 162 square miles (260 square km). 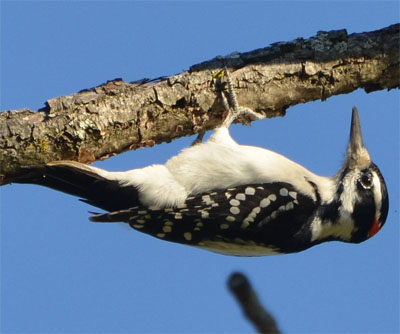 Hairy Woodpeckers are usually found in mature mixed woods around campgrounds and picnic areas. This robin-sized bird can be recognized by the vertical white stripe on its black back, and its long bill. Like most woodpeckers, the Hairy Woodpecker feeds on tree boring insects, berries, acorns and sap. These woodpeckers are very often confused with Downy Woodpeckers which have the same markings but are smaller in size and have a shorter bill. 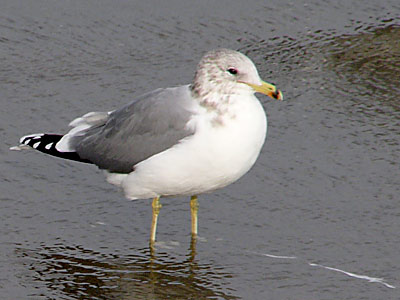 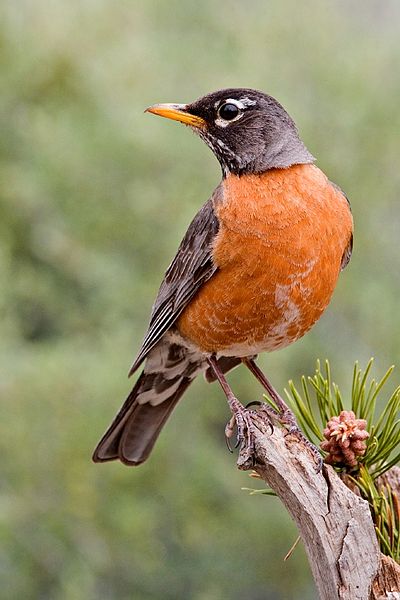 The Robin is a summer visitor in the Lake Tahoe Basin, appearing soon after the snow melts. Its brick-red breast, yellow bill and gray back makes identification easy. It is a very common bird, frequently observed hopping across lawns or small openings in the forest searching for worms and insects. 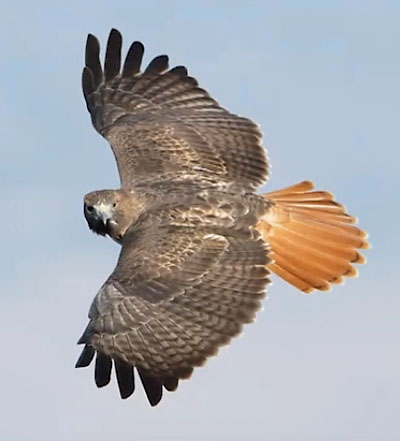 A large heavy set hawk with broad wings, the adult Red-Tailed Hawk is dark brown above and light below with a reddish tail. These hawks habitually soar in wide circles and can easily be seen on clear days, seemingly to enjoy the view, when actually they are hunting for rats, mice, rabbits, or an occasional small reptile.

Fallen Leaf Lake offers a variety of birds and nice trails for birders. The best time of the year for birding at Lake Tahoe is from April to July.

Mount Tallac (9,735 ft.) and nearby Taylor Creek are marvelous habitats for specialty birds, including Blue Grouse, Pygmy Nuthatch, Osprey, Western Tanager, Calliope Hummingbird, and in the winter, Bald Eagle. Also, a lot of types of woodpeckers, such as the Hairy Woodpecker and the White-headed Woodpecker, live there along with a wide variety of terns, sparrows, warblers and finches.

Just ask anybody who has ever lived in South Lake Tahoe about the numerous woodpeckers there. You may get a long response including their description of the extremely loud drilling sound of a woodpecker pile driving holes in the siding of their homes, and recommendations for siding repair as well as ways fend off the birds so that they will go back to the wild and drill tree bark instead of expensive real estate. But, even the most annoyed homeowner will also describe in detail the beauty of the woodpeckers!

You can continue on the trail across the north shore of Fallen Leaf Lake, about a mile, for a lovely 3-mile out-and-back hike. Or, you can follow the trail another mile toward the north along Taylor Creek to the Fallen Leaf Campground.

Another option is following the Rainbow Trail located at the Visitor Center for an interesting 1-mile walk. Take it easy here, remember you are at 6,300 feet elevation.

Once you have accomplished your birding, you can stop off at the The Tallac Historic Site on the way back to South Lake Tahoe, since it's only a mile away.

The Donner Memorial State Park is a popular place for birding, because it's a habitat for many birds. You can find White-headed Woodpecker, Pygmy Nuthatch and Williamson's Sapsucker, and in the summer you will see the Calliope Humingbird, Flycatchers, Western Tanager, and lots of other birds, such as the Dark-eyed Junco, Hairy Woodpecker, Spotted Sandpiper, Chipping and Fox Sparrows, and also many types of Warblers.

The best time of the year for birding at Donner Memorial State Park is Late April through July. This park is located on Interstate 80, about a mile west of the Hwy. 89 junction at Truckee. To get there, take Donner Pass Road to the park entrance.

You can also enjoy camping out here, since there are 154 available camping sites. Or stay in town. Truckee is the nearest town, with shopping, restaurants, resorts and of course food, lodging and gas.

Visitors to this page like...
Birds of Northern California

The Carson Pass and Hope Valley areas are great places for viewing a variety of specialty birds, such as the Townsend's Solitaire, Cassin's Finch, Mountain Chickadee, Steller's Jay, Clark's Nutcracker, and the Blue Grouse. Also, during the season from June to October, you will see Prairie Falcon, Hermit Warbler, Dusky Flycatcher, Mountain Bluebird and the Green-tailed Towhee. Lest we forget, other noted birds in this area include the Great Horned Owl and the Hairy Woodpecker, the Dark-eyed Junco and during the summer the Warbling Vireo. Four types of sparrows can also be seen, including the Fox, Lincoln's, Chipping and White-crowned Sparrows.

This area is high on the mountain pass near South Lake Tahoe. The Carson Pass is 8,574 ft., so it's waay up there! To get there from South Lake Tahoe, drive over Luther Pass and take a right when you get to Picketts Junction (on Hwy. 88). The easiest way to get directions is to just Google for a map of South Lake Tahoe to Carson Pass.

You can also locate Carson Pass by traveling 55 miles east of Jackson on Hwy. 88. Restrooms are available. Going this direction, Hope Valley is another 7 miles down the road to the east of Carson Pass on Hwy. 88.

This is mountainous terrain and not a flat hike, and the elevation can be between 7,100 feet and 9,000 ft. in this area. Here you are surrounded by several higher peaks, including Steven's Peak, Red Lake Peak, Round Top, and Hawkin's Peak.

Also the Hope Valley birding area has two wildlife viewing areas, one at each end of the Hope Valley Meadows. To get maps and more information before venturing out you can contact the Carson Ranger District.

The Audubon Society lists 11 birding areas near South Lake Tahoe and another 9 birding areas in western Nevada, so this is truly a birder's paradise. Everywhere you go, you will actually find unbelievable birding! May you experience the thrill of an eagle flying across your bow as you cross country ski next to Spooner Lake, or the excitement of watching hawks dive bombing for dinner in the same location during the summer.

We hope you have enjoyed this short introduction to birding in the Lake Tahoe and Northern Nevada area. We have always enjoyed the birds of Tahoe, our constant companions on many Tahoe and High Sierra adventures! And, it's fun to say that this Lake Tahoe Birding page is one of our most popular pages on TahoeHighSierra.com. Thanks for visiting! Please support our Lake Tahoe website by patronizong our sponsors when looking for Lake Tahoe real estate, lodging or other products. Thank you for visiting and enjoy your birding at Lake Tahoe and Beyond!